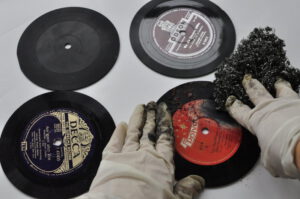 KONTEJNER is welcoming Berlin based Canadian artist Darsha Hewitt as the 2021 EMAP resident. Her two-month online residency will focus on the second part of the audio-centric trilogy “High Fidelity Wasteland” that experiments with the material waste left over from generations of decomposing sound reproduction technology.

“High Fidelity Wasteland II: The Proto-Plastic Groove” is an electromechanical sound installation that up-cycles sonic expression by grinding down, liquifying, re-pressing and cutting new traces into obsolete music storage formats. Spinning at 78 revolutions per minute, the shellac record was the first form of disk-shaped recording produced to be widely collected, consumed and as with the way things go within the music industry – ultimately cast off as an abandoned media in favour of the more cheaply produced medium and in this case, the vinyl record.

With KONTEJNER’s production and curatorial support during the residency, Hewitt will focus her research on shellac as a material. Shellac holds a particular transitionary position at the outset the petro-capitalist pursuits of the music industry – this dark resinous compound is a by-product of insect life originating from the female lac beetle, that secretes this resin within trees to shelter and protect her offspring. At the turn of the 20th century, this natural by-product was heavily harvested in South Asia and acted as the carrier format for popular music of the time. When rendered down to its elemental properties, shellac is chemically similar to synthetic polymers and can be considered a natural form of plastic.

EMAP – European Media Art Platform is a network of eleven European cultural institutions and organisations that annually offer productions grants to European artists working in the field of media art.